Review: ‘American Traitor: The Trial of Axis Sally’ has Al Pacino, but little else 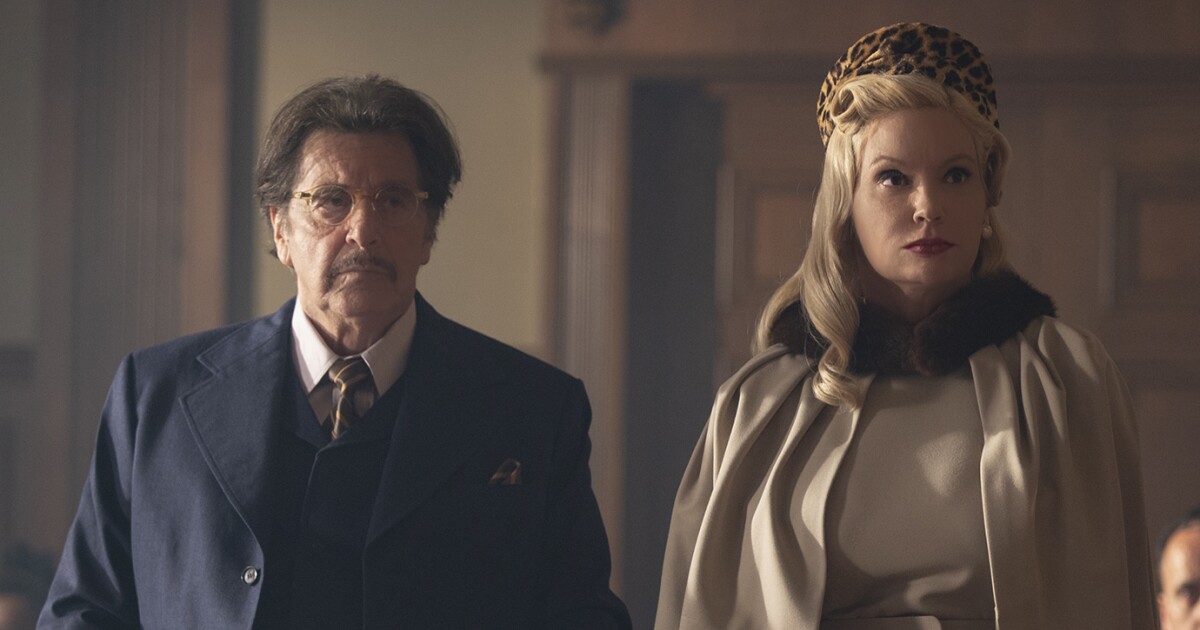 The Times is committed to reviewing theatrical film releases during the COVID-19 pandemic. Because moviegoing carries risks during this time, we remind readers to follow health and safety guidelines as outlined by the Centers for Disease Control and Prevention and local health officials.

“American Traitor: The Trial of Axis Sally” is the fact-based story of Mildred Gillars, an aspiring American actress who was tried in 1949 on eight counts of treason for her role as a radio propagandist for Nazi Germany during World War II.

It’s a potentially fascinating story, but this ambitious film, directed by Michael Polish (“Twin Falls Idaho,” “The Astronaut Farmer”), is hindered by a middling script by Vance Owen, Darryl Hicks and Polish (based on a book by Owen and his late father, William) and an underwhelming title turn by Meadow Williams. The star’s limited range and overreliance on glamorous, femme-fatale-like stylings distance us from the dubious, seemingly complex Gillars, an inherently hard character to embrace at best. (Real-life photos also show her to be less the bombshell than in Williams’ breathy portrayal.)

The film shuttles between the time around the trial and earlier that decade when Gillars is hired by Hitler’s minister of propaganda, Joseph Goebbels (Thomas Kretschmann), to read his deceitful scripts over Radio Berlin as part of a quasi-variety show aimed at U.S. soldiers abroad. In sultry tones, Gillars, a.k.a. Sally (or “Axis Sally” as less enamored GIs would dub her), broadcasts a grab bag of provocative chatter designed to confuse and sow doubt in her millions of listeners and undermine their belief in America’s war effort. In between these veiled, at times antisemitic monologues, she’d warble popular American songs to add to the soldiers’ longing for home.

Meanwhile, the monstrous Goebbels sporadically rapes Gillars under the nose of her devoted lover, program director Max (Carsten Norgaard). As her legal defense will later contend: “She did what she was told, or else,” which includes signing an oath of allegiance to Hitler. But, historically, it’s not quite that clear-cut.

There is a bright spot to the movie, though, and that’s Al Pacino, at his sly, rumpled, irascible best, as James Laughlin, the veteran Washington attorney who represented Gillars in her trial against the government. Laughlin purposely keeps his client at arm’s length during much of the trial period, dispatching nervous new junior lawyer Billy Owen (yes, the script source’s co-writer, played by an uneasy Swen Temmel) to update Gillars as needed. But the brash Laughlin presents a lengthy and stirring closing argument, to which Pacino brings a welcome dash of his old “… and justice for all” brio.

Period re-creation is decent (the interiors-heavy film was shot entirely in Puerto Rico), Polish effectively peppers in bits of archival footage, and the story is often involving despite its missteps. Still, it’s hard not to wonder where the picture might have landed with a more skillful, charismatic lead and a subtler retelling.

In English and German with English subtitles