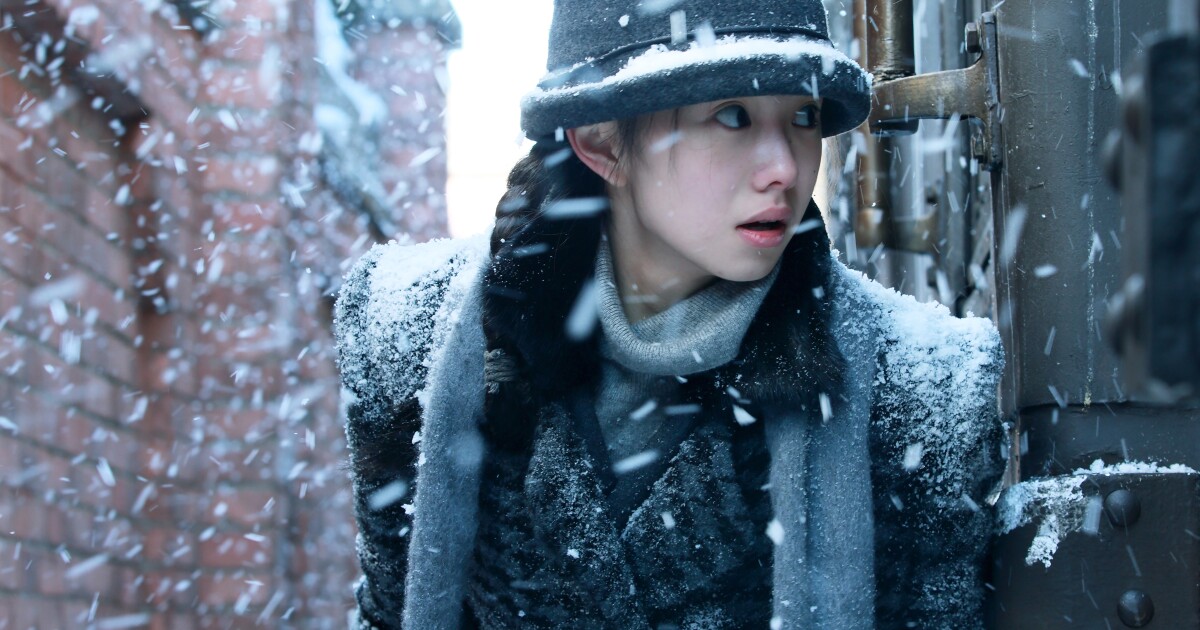 The Los Angeles Times is committed to reviewing new theatrical film releases during the COVID-19 pandemic. Because moviegoing carries inherent risks during this time, we remind readers to follow health and safety guidelines as outlined by the Centers for Disease Control and Prevention and local health officials. We will continue to note the various ways readers can see each new film, including drive-in theaters in the Southland and VOD/streaming options when available.

With “Cliff Walkers,” storied Chinese filmmaker Zhang Yimou (“Ju Dou,” “Raise the Red Lantern,” “Hero”) turns his finely tuned eye to the spy genre. The result is twisty and tense, ugly and gorgeous. Viewers will get pretty much what they expect, for worse and for better.

Two Chinese couples trained in Russian spycraft (Zhang Yi, Qin Hailu, Liu Haocun, Zhu Yawen) parachute into the puppet state of Manchukuo during the Japanese occupation of the 1930s and ’40s. Their mission will be revealed later, but that objective is secondary to their struggle to stay undiscovered with collaborators and double- and triple agents around seemingly every corner. The good-guy spies split into two teams (separating the couples) and constantly face the possibility of betrayal as they slide and sneak toward their goal. Scenes play out like high-stakes poker hands. As one team is unknowingly surrounded by double agents, the other hides, mostly in plain sight. The spies — and their hunters — can trust no one.

There are a few obligatory boxes checked. There are the portrayals of collaborators with the Japanese as inhuman scum and glorification of the Communist Party (both Russian and Chinese versions). And per the genre, there’s the deadly dance of detection and double crosses. However, there is also Zhang’s trademark careful calibration of the color palette and rich, textured cinematography. Not that that’s unprecedented for spy movies; Roger Deakins was Oscar-nominated for lensing the Bond entry “Skyfall,” and Rob Hardy should have been nominated for “Mission: Impossible — Fallout.”

But Zhang (along with cinematographer Zhao Xiaoding and production designer Lin Mu) brings a distinct visual stamp to the film, especially during sequences in the snowy woods and with expert use of overhead shots. Rather than the lush warmth and brilliant hues that characterized some of his previous works, here he surrounds the cold paranoia thrumming through the spine of the film with austere whites and grays. Most of the characters — almost all agents on one side or another — are cloaked in shades from slate to collaborator’s-soul black.

The performances are strong, particularly by Yu Hewei as a high-ranking officer in the counterespionage task force hunting the spies; Zhang Yi as a determined operative; and Liu Haocun, whose youthful appearance masks a powerful will and intelligence. Each team member plays a key role in the scheme, and each must dig deep for resilience and resourcefulness.

The story moves crisply, though with all the twists and the lack of introductions to the main players, it’s not easy to follow at first. The fights and chases are handled expertly (the “action director” is Jung Doo); they’re dynamic but believable and deliver emotional impact. One can forgive such head-scratching elements as why the streets are conveniently empty for car chases when moments of brutal torture land so effectively.

“Cliff Walkers” presumably gets its title from the dangerous path the heroes must tread, and Zhang’s film succeeds in generating high-grade tension.

In Mandarin with English subtitles

Playing: Starts April 30 in general release where theaters are open